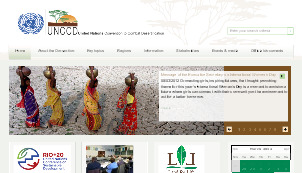 Desertification, along with climate change and the loss of biodiversity, were identified as the greatest challenges to sustainable development during the 1992 Rio Earth Summit. Established in 1994, UNCCD is the sole legally binding international agreement linking environment and development to sustainable land management. The Convention addresses specifically the arid, semi-arid and dry sub-humid areas, known as the drylands, where some of the most vulnerable ecosystems and peoples can be found. In the ten-year Strategy of the UNCCD (2008-2018) that was adopted in 2007, Parties to the Convention further specified the aim for the future to be ..."to forge a global partnership to reverse and prevent desertification/land degradation and to mitigate the effects of drought in affected areas in order to support poverty reduction and environmental sustainability".