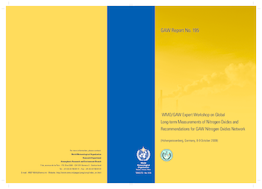 Nitrogen oxides are a component of a group of reactive gases required to be measured in the GAW Programme. The reactive gases group focuses on gases known to be intimately involved in various aspects of the chemistry of the troposphere and includes surface ozone (O3), carbon monoxide (CO), volatile organic compounds (VOCs), and sulphur dioxide (SO2), as well as oxidized nitrogen species. The sum of nitric oxide (NO) and nitrogen dioxide (NO2) has traditionally been called NOx. The sum of oxidized nitrogen species with an oxidation number >1, both organic and inorganic, is referred to as NOy (see Table 1 for individual molecules) (Fahey et al.,1985). Nitrous oxide (N2O) is obviously an oxide of nitrogen but it is not dealt with in this report because it is inert in the troposphere. It is measured separately by another component in the GAW Programme because of its role as a greenhouse gas.
The focus of this report is on NO and NO2 mostly because their measurements are presently more extensive and it is thus easier to establish high quality measurements with a fully implemented quality assurance system. Measurements of total NOy are presently undertaken in the GAW framework but the measurement quality control and calibration methodology is deemed not mature enough at present to recommend the inclusion of total NOy measurements for GAW.