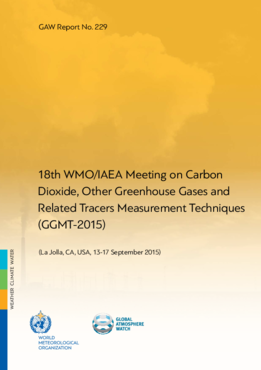 The 18th WMO/IAEA Meeting on Carbon Dioxide, Other Greenhouse Gases, and Related Measurement Techniques (GGMT - 2015) took place from 13 to 17 September 2015 at the Scripps Institution of Oceanography in La Jolla (CA), USA. It was the 40 th anniversary of the first GGMT meeting (then called "CO 2 Experts Meeting") which was also held at Scripps in 1974. WMO has provided the framework for all carbon dioxide experts meetings since 1975. IAEA in Vienna joined WMO as a co - organizer in 1997 due to the increased use of carbon isotopes in studying the carbon cycle. The meeting reviewed current WMO data quality objectives and observation scales, covering such topics as carbon dioxide and other greenhouse gases, stable isotopes, radiocarbon in greenhouse gas measurements, calibration, quality control, data management and archiving. The workshop also discussed new and emerging technologies, including measurements of greenhouse gases with high - precision spectroscopic methods. Special goals for GGMT - 2015 were to have a larger emphasis on carbon monoxide measurements and to expand the scope to include measurements of dissolved greenhouse gases and related ocean tracers and to discuss GHG observations in the urban environment.