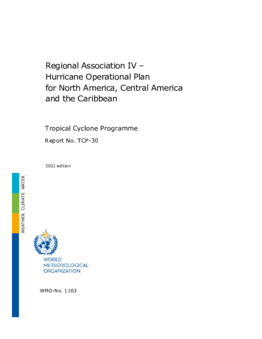 The regional activities under the WMO Tropical Cyclone Programme consist mainly of the programmes pursued by groups of countries acting in concert to improve their warning systems. In Region IV (North America, Central America and the Caribbean) there is a long history of collective action specifically designed to protect people and property from the severe tropical cyclones which are called hurricanes in the Region. A working group, known as the RA IV Hurricane Committee, was established by the seventh session of Regional Association IV (Mexico City, April May 1977) to promote such activities within the framework of the Tropical Cyclone Programme (Tropical Cyclone Project until Eighth Congress, 1979).
As requested by the RA IV Hurricane Committee, the RA IV Hurricane Operational Plan has been made available to all concerned through this document. New editions and supplements will be issued from time to time in the years ahead to reflect further development, updating and other changes to the plan.